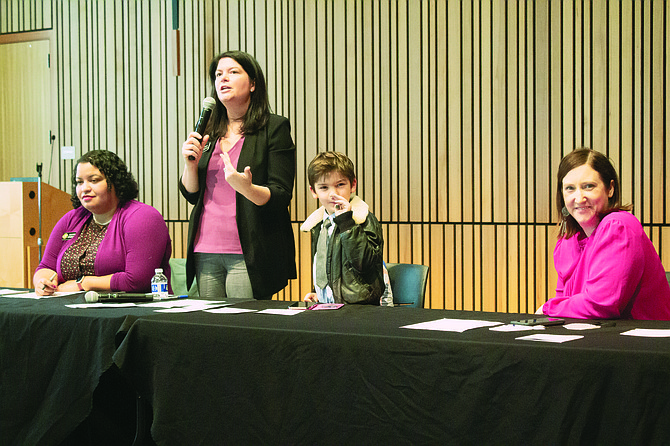 Washington State Legislature’s session began Jan. 9, and the three legislators from District 36 had a busy week that ended with a town hall meeting with a crowd of interested constituents Saturday in Ballard.

At the town hall, the three District 36 legislators, Rep. Liz Berry, Rep. Julia Reed and Sen. Noel Frame shared their priorities for this session, which ends April 23, and what they would like to see accomplished.

For Berry and Reed, it was their first trip to Olympia and the Capitol Building as legislators. Reed is newly elected to the legislature, filling the seat Frame used to have. And although this is Berry’s second term, it is the first where business is taking place in person in Olympia. Frame is in her seventh year as a legislator, her first as a state senator. She replaced former Sen. Reuven Carlyle, who retired after his last term.

She said one thing she is already pleased about is the new format for the Legislature. In previous years, if legislators were sick or unable to attend for a day for whatever reason, they missed all action for the day and were unable to vote on legislation. This year, if legislators can’t attend in person, they can participate remotely, and their votes will be counted. Residents can also listen in or testify on legislation remotely, as well.

That is important for the District 36 legislators as each has a full slate this session with committee work and legislation they are either sponsoring or supporting.

She said all of her legislation will work toward her continued priorities as a legislator, creating economic prosperity for everyone; rebalancing the state tax code; and strengthening community diversity.

While much of her legislation will focus on fixing the regressive tax code that puts much of the burden on the poor and middle class, including a continued push for a wealth tax, she also has four bills focusing on juvenile justice. One she feels especially strongly about is making clergy members mandatory reporters. Currently, they don’t have to report cases of abuse to law enforcement or any other agency.

“I think that is unconscionable, and we really need to fix that,” Frame said.

Berry is the chair for the Labor & Workplace Standards Committee and is assigned to the Environment & Energy and Transportation committees.

Berry said one of her top priorities continues to be gun control legislation. Last session legislation she worked on included banning high-capacity magazines; eliminating untraceable “ghost guns”; and prohibiting armed intimidation in the democratic process. This session she is working on measures that will: ban the sale of assault weapons; require a permit to purchase a firearm to include a comprehensive background check, safety training and 10-day waiting period; and hold the gun industry accountable by allowing lawsuits to be brought against companies in response to shootings.

“Gun violence is now the No. 1 cause of death for children in our country,” she said. “As a mother, this is devastating to me.”

As part of her work on the Environment & Energy Committee, she will introduce the WRAP Act, House Bill 1131, a plan to curb the amount of recyclable materials going to landfills and expand recycling services to more households. She said one piece of the legislation, which she is introducing with Sen. Christine Rolfes (D-Bainbridge Island), is to require producers to be responsible for disposing of their waste products, such as Styrofoam shells used in packing.

Her last priority is to launch a statewide guaranteed basic income pilot program, HB 1045, the Evergreen Basic Income Pilot Program, to reduce poverty in the state.

In her newsletter, she wrote that a guaranteed basic income program “is a smarter, more compassionate, and less expensive way to give people basic help” and can be funded through revenue generated through some of the other taxing measures being proposed this session.

Reed is the vice chair of the Postsecondary Education & Workforce committee and a member of the Capital Budget and Housing committees.

“I just wrapped up my first week in Olympia, and it felt like a year. It was great,” Reed said.

She said that, while she came in with so many ideas of all the things she wanted to accomplish and the legislation she wanted to introduce, she quickly learned the reality of Olympia is “you’ve just jumped aboard a moving train that’s hurtling down the tracks.”

She said, at least at first, she will focus on legislation already in the works that she supports and advocating for the issues her constituents care about.

That said, she has already introduced a few bills. The first supports mental health therapies by creating a pathway to licensing for music therapists. Only Seattle Pacific University has a music therapy program where graduates become certified. Otherwise, someone who receives music therapy has no way to tell how qualified their music therapist is or their insurances won’t pay for them to receive it.

Another bill ensures the Washington Opportunity Scholarship program can continue assisting low and middle-income students to earn their degrees and credentials.

The last bill reasserts an employee’s right to their workplace personnel records.

At the end of the meeting the legislators invited constituents to reach out to them with ideas or concerns and visit their respective webpages for more information.