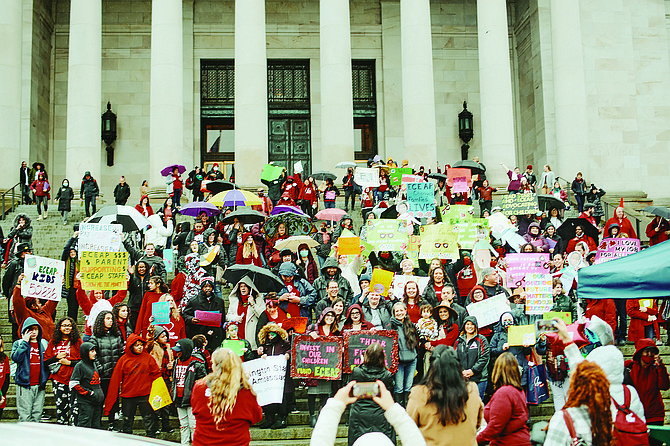 Parent Ambassadors, educators and parents from all over the state gathered to advocate for expanding Early Childhood Education and Assistance Program services and paying its teachers fairly.
Ewings Photography

Last week, Tamara Sharabi traveled to Olympia to participate in the Advocacy Day for the Early Childhood Education and Assistance Program, Washington state’s pre-kindergarten program for families furthest from educational justice. This was the first time she had engaged with lawmakers like this, and she was surprised to discover how relatable they are.

Sharabi works as a tutor for Seattle Public Schools and her husband, Muthanna Algammaz, is a truck driver. They first learned about ECEAP when their daughter, Valentina, was diagnosed with autism when she was 2 ½ years old. They had a lot to learn about their child’s diagnosis, and they read all of the resource papers that the doctors gave them.

Through their research, they heard about the Experimental Education Unit at the University of Washington’s Haring Center for Inclusive Education and enrolled their daughter. EEU is an ECEAP program that offers comprehensive preschool services for children both with and without disabilities and wraparound services for their families. Unfortunately, there are not enough programs like this for families who need assistance, and teachers are frequently not paid a thriving wage.

Sharabi and many others are trying to change that, however.

For Advocacy Day, last week, Sharabi and other Parent Ambassadors travelled to Olympia to meet with their lawmakers and advocate for change. It comes at the end of the year-long training program for ambassadors.

Joel Ryan, the executive director of Washington State Association of Head Start & ECEAP, works on the advocacy training with the volunteers.

“My favorite part of Parent Ambassadors is seeing parents learn that they have power and can use it to change things for themselves and their families for the better,” Ryan said.

According to the website, the WSA Parent Ambassador Program includes training on communications, leadership, legislative advocacy, racial equity and social justice, financial literacy and grassroots organizing. Ryan noted that some of the program’s past successes have included doubling the number of children served in ECEAP, stabilizing childcare for families and helping to make childcare subsidies more accessible for parents who are students. Parent Ambassadors also receive 16 college credits for completing the program.

Sharabi recalls a time when sharing her story publicly would not have been possible, but the Parent Ambassador program helped her find her voice.

“On behalf of my 6-year-old, I am her voice in this world,” Sharabi said. She is autistic and if it wasn’t for her, I wouldn’t be a Parent Ambassador.”

She first heard about the program from a friend who had also been a Parent Ambassador. Sharabi said she enjoyed meeting new people and found it empowering to learn to advocate for herself, her family and her community.

“The magic of Parent Ambassadors is difficult to explain,” said April Messenger, who works alongside Ryan as the director of Family Engagement & Advocacy. “Helping parents find their voice and harness their power is incredibly meaningful.”

What started in 2009 as a small group of ECEAP parents has expanded to include any parent with children under age 8. This year, a cohort of 40 new volunteers is expected.

Throughout the year, they meet in twice monthly Zoom calls, and each quarter, they have a face-to-face meeting. Conference highlights have included meeting and hearing from local and state leaders, crafting a letter to the editor, workshops with financial advisers and award-winning authors, and unstructured to time to bond with other parents. The final meeting of the year is for the Advocacy Day at the Capitol Building in Olympia when the legislators are back in session.

This year, Sharabi met with two of the lawmakers from the 36th Legislative District: Sen. Noel Frame and Rep. Liz Berry.

Berry said she was inspired by Sharabi’s story of overcoming obstacles to get the care her daughter needs and deserves.

“As a mom of young kids and as a legislator, I am determined to fund critical ECEAP services so that every child gets a strong start,” she said. Fellow District 36 Rep. Julia Reed agreed. She said she was “committed to ensuring that our early learning teachers are well paid for the essential work that they perform.”

Sharabi is hopeful that Gov. Jay Inslee’s budget will expand ECEAP and includes a proposed increase for teacher salaries. Her daughter has been on a waitlist for therapy for more than three years.