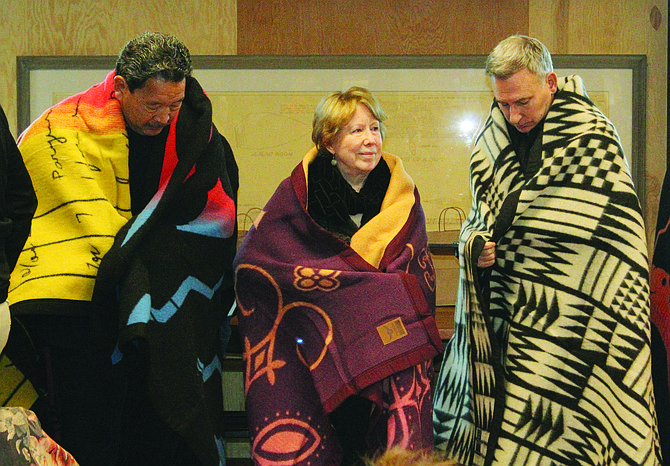 From left: Seattle Mayor Bruce Harrell, District 4 County Councilmember Jeanne Kohl-Welles and King County Executive Dow Constantine wear the ceremonial blankets presented to them at the blessing for the future United Indians of all Tribe Foundation’s Native Northwest Canoe Carving House at the Center for Wooden Boats next to South Lake Union.
Photo by Jessica Keller.

City and county government leaders, as well as leaders and representatives of the coastal Native American tribes, celebrated a new project to honor and recognize the Native culture and history in the city with a blessing ceremony of the future Northwest Native Canoe Center on the west side of South Lake Union.

The United Indians of all Tribes Foundation, whose home is at Daybreak Star in Magnolia’s Discover Park, has pursued the project to honor and reconnect coastal Native American tribes’ heritage, history and culture of canoe carving in the region and share that history and their stories with the public once complete.

U.S. Rep. Pramila Jayapal, who had to be in Washington D.C., sent a video expressing her enthusiasm for the canoe carving house.

At the blessing ceremony Friday, United Indians of all Tribes Foundation Executive Director Mike Tulee, and member of the Yakama Nation, said UIATF members have wanted to celebrate the tribe’s ties to canoe carving for some time but only recently did all the funding come together. That includes $700,000 in federal funding and $1.1 million from King County that pushed the project over the finish line.

“This project is long past due,” Tulee said.

Canoes have a place of significance to coastal tribes. They were the main source of transportation for the coastal tribes. The carvings not only were used to identify the tribe from which it came to other tribes, they also told stories of the tribe’s past.

“The canoe center is a step forward in ensuring our story, our people and our ways of life are sustainable for generations to come — we’re still here and we will continue to stand strong in culture and community,” Tulee said. “This project brings a significant addition of Native culture, power and technology to the heart of downtown Seattle.”

Kohl-Welles said she has been a long-time admirer of Tulee and the UIATF that when he approached her about possible funding, she was   happy to request that funds be allocated in the county budget.

“I pleaded, I lobbied, I tried to do everything I could,” she said at the ceremony.

She said, even after she made her case to the budget committee, she was pleasantly surprised the entire $1.1 million made it into the budget.

“It was absolutely thrilling that it was our money that could push [the project] over the finish line,” Kohl-Welles said after the ceremony.

Kohl-Welles said she thinks the project is a “perfect example of how we as community leaders can put our money where our mouth is.”

“While the past is tragic and the present still problematic, I’m looking forward to the future,” she said.

Constantine said the canoe-carving center not only honors the coastal tribe’s history, it also “makes a statement of our determination for the future.” He said the coastal tribes’ ties to the water and canoes is thousand of years old, whereas the discrimination and injustice the tribes faced from colonizers is still quite recent. He said the burning of a longhouse by white settlers in Seattle took place in some of their grandparents’ lifetimes. The canoe-carving center and future welcome house not only helps atone for the past, Constantine said it helps the city and region find its way back to creating a better future.

“This will be a special place for everyone in King County,” he said.

When complete, the building will be 1,200 square feet with an overhang for outdoor carving that increases the square footage to about 1,600 square feet, said architect Bruce Arnold from Jones & Jones Architects. The company is currently getting permits filed with the city, Arnold said, with the project likely to break ground this fall. He said it will take 10 to 12 months before it is complete. The canoe carving center is phase 1 of the UIATF’s plan at the cite. Phase 2 includes a welcoming house for cultural events, a catering kitchen and gift shop. The cost for Phase 1 is estimated to be $4.7 million, Arnold said.